Famous for being home to one of the world’s top football teams, the Rio de Janeiro Carnival and the remarkable Iguazu Falls, Brazil is an exciting world travel destination. As South America’s largest country, Brazil covers a majority of the continent’s northeastern region and borders all of its countries except for Chile and Ecuador.

From the Amazon rainforest in the North to the tropical beaches along the Atlantic, to the Pantanal wetlands and the vibrant metropolises of the Southeast there are plenty of interesting places to visit in Brazil.

One of Brazil’s best-preserved colonial cities, Olinda is located on the country’s Atlantic Coast in the northeastern state of Pernambuco. Founded by the Portuguese in the early 16th century, the city served as the state’s capital until it was burned by the Dutch, thereafter losing its sovereignty to its nearby neighbor, Recife.

Perched on a picturesque hilltop surrounded by trees, Olinda’s historic downtown is a treasure trove of colonial churches, colorful old houses and numerous artisan studios. Because of its love affair with art, Olinda packs many shops and markets selling paintings, ceramics, sculptures and handicrafts.

Every year, Olinda hosts its lively Carnival celebration that differs somewhat from those of Rio de Janeiro and Salvador in that Olinda’s festival is best at daytime and features the music, dances and traditions of African culture. Olinda’s Carnival involves parades, lavish costumes, giant puppet dolls, street parties and the rhythms of maracatu and frevo.

However, even outside of the Carnival season, Olinda offers an animated culture where every weekend buzzes with parties, bars, nightclubs and singing groups who perform serenades of traditional songs in the streets.

Covering a vast swathe of western Brazil, as well as parts of Paraguay and Bolivia, the Pantanal is the world’s largest and most diverse tropical wetland area. Due to its stunning scenery and incredible wildlife, the region is increasingly popular to visit, although its remote and watery nature does pose a few challenges.

During the rainy season, around 80 percent of the floodplains are submerged, so the only way to get around is by plane or boat. It is worth it, however; the endless marshes and grasslands are home to an astounding array of fauna and flora.

Besides exploring the scenic landscapes ranging from swamps and savanna to lakes, forests, and wetlands, visitors are also sure to spot many caiman and capybara. The highlight of any trip is spotting the South American jaguar; the Pantanal is the best place on the continent to catch a glimpse of the elusive creature.

The capital of Santa Catarina state, Florianopolis lies in the south of Brazil, with half of the city set on the mainland and the other on a beautiful island. Due to its scenic setting, it is a very popular tourist destination and is widely considered one of the best places to live in the country.

An important economic, cultural, and political centre, Florianopolis is a modern city with lots of large shopping malls and chic restaurants, as well as lively bars and nightclubs. Despite this, it is a lovely laidback place, and each of its neighbourhoods has its own distinct identity.

The main attraction, however, is the wealth of fabulous beaches, which total around 60. While relaxing in the gorgeous scenery is divine, Florianopolis also has stunning dunes, sparkling waterfalls, and forested mountains – as well as a large lagoon for visitors to explore. Hiking and cycling around the ‘Magic Island’ (which it is also known as) are popular activities, as are paragliding and watersports.

The capital of the Amazonas state in northwestern Brazil, Manaus is an important tourist destination because it serves as a gateway to the Amazon rainforest.

As a result of the region’s flourishing rubber industry during the early 20th century, Manaus today is Northern Brazil’s largest metropolitan area, featuring distinguished landmarks like the Amazonas Opera House, the Adolpho Lisboa Market and the Rio Negro Palace. Not only is the port of Manaus an important commercial hub for several manufacturing industries, but it also serves as the most popular starting point for river tours into the Amazon rainforest. Some of the most striking things to see on these tours include the Paricatuba Waterfall, Love Cascade and glimpses of the Pied tamarin, Brazil’s most endangered monkey. Another significant sight is the Meeting of the Waters, which is a natural phenomenon where the two rivers of Negro and Solimões run side by side for more than three miles without mixing.

Besides the rainforest and river, Manus also offers public parks, a botanical garden and a zoo. Several beaches are here as well such as Ponta Negra with a number of restaurants, bars and hotels.

A historic Old City, beautiful beaches, lively culture and one of the world’s biggest Carnival celebrations all fashion Salvador into one of Brazil’s top tourist destinations. One of the oldest cities in the Americas, Salvador is Brazil’s third largest city and the capital of the Bahia state.

Formerly a major center of sugar and slave trade, Salvador today still bears traces of its history in its Old City, which features colonial architecture, stunning churches and plazas where important events once occurred. Also found in the old quarter are many restaurants, bars, art galleries and handicraft shops. Contrastively, Salvador’s New City district is where all the modern day developments of shopping megaplexes, entertainment venues, golf courses and residential neighborhoods are located.

Situated on the coast of the Bay of All Saints, Salvador offers fantastic beaches that are ideal for sunbathing, swimming and surfing. Some of the most popular include Porto de Barra, Flamengo and Stella Maris.

One of Salvador’s main crowd-pullers is its annual Carnival celebration. Acclaimed as one of the largest in the world, this extravagant event involves music, dancing, parades, costumes and street parties.

One of the most awe-inspiring natural wonders in the world, Iguazu Falls straddles the Argentine-Brazilian border. It is often compared to Niagara Falls and Victoria Falls, such is its staggering size and scale. Surrounded by dense rainforest, its endless series of cascades stretch for almost three kilometres, making it the largest waterfall system in the world.

Every second, incalculable gallons of water from the Iguazu River course over the Parana Plateau, plunging onto the rocks and pools below. While 80 percent of the falls are in Argentina, it is the Brazilian side that offers the most spectacular views, with Devil’s Throat canyon being the highlight.

Besides gazing in awe at Iguazu Falls and taking in the deafening roar, visitors can take a boat ride beneath the falls or go hiking in the steamy rainforest that surrounds them. The gateway to the falls on the Brazilian side is Foz do Iguaçu, a big and reasonably safe city by Brazilian standards. 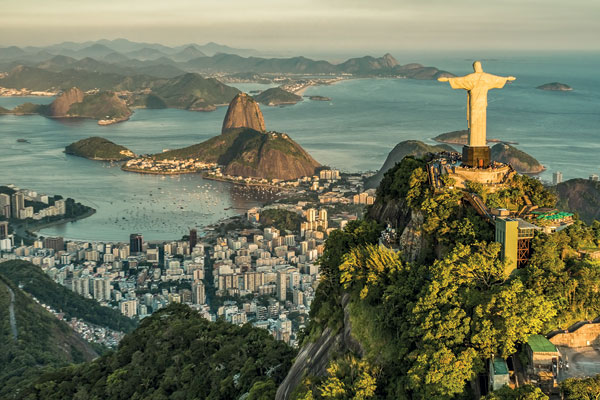 There is no destination on earth more animated and exciting than Rio de Janeiro. Located in southeastern Brazil, Rio de Janeiro is the most visited city of South America due to its famous mountains, beaches and Carnival festival.

The city’s iconic landmark is the enormous Christ the Redeemer statue sitting atop Corcovado mountain. Other important landmarks include colonial fortresses, former presidential palaces and Maracanã Stadium, one of the world’s largest football stadiums.

Sadly, most people also know Rio for its crime and favelas. The favelas are areas of poor-quality housing, slums usually located on the city’s many mountain slopes, juxtaposed with middle-class neighborhoods.

Rio de Janerio is home to one of the world’s largest Carnival celebrations, renowned for its vibrant parades, costumes, dancing, music, fireworks and street parties. Outside of the festival, the city buzzes nightly with an abundance of bars and dance clubs.